Secure your door locks and frames

In most cases it only takes and intruder a few seconds to force open a locked door.

As a homeowner it is your responsibility to secure your home to a level at which you feel most comfortable. You should start with all exterior doors and frames. These two basic areas are almost always overlooked because we tend to accept them as they are.

Doors and frames are generally purchased as single units and are placed into the wall opening provided by the builder during construction. Although the opening between the wall and frame are braced at the top and bottom with alignment wedges, the mid-sections are often left open. This permits the frame to bow under pressure. The remedy for this is to install solid blocks between the openings to help prevent the frame from bowing when pried.

To strengthen the frame, install large three- to four-inch screws through the door strip and frame continuing into the heavier wood of the wall construction. The screws will pull the door frame and door-stop strip tightly against the main wall 2-by-4′s.

Install three- to four-inch screws through the frame on the hinge side to further reduce an intruder’s ability to spread the door and frame. When installing these screws, drill a shallow hole slightly larger than the screw so it can be recessed and filled with a patching compound to give a nice finished look.

Outside doors should not be of hollow core construction (thin wood panels filled with cardboard or fiber filler). Even the best locks are rendered useless on doors such as these.

A common misconception about metal-clad (or steel-skin) doors is that they are more secure than wood doors. Metal-clad doors were introduced many years ago to overcome two main problems of wooden doors: maintenance and warping. Almost all metal clad doors have a relatively weak perimeter wood frame that the steel fits into, called a stile. Because of the weakness of the stile, it can be easily forced by a potential intruder. If you are purchasing metal-clad doors make sure they have strong laminated stiles for maximum strength.

Check to see if the screws in the hinge leaves and strike plates (the plate that accepts the bolt) are small screws. If so, replace them with three- to four-inch screws assuring that you will reach the wall stud beyond the frame. When installing larger screws, always drill pilot holes first to prevent the frame from splitting.

There are many products that I have used over the years to help secure doors and frames in homes & businesses. The one that stands out the most in my eyes is the Bolt Buddy. It can not only help reinforce the frame, but will act like a vise making the weakest doors much harder to break through. 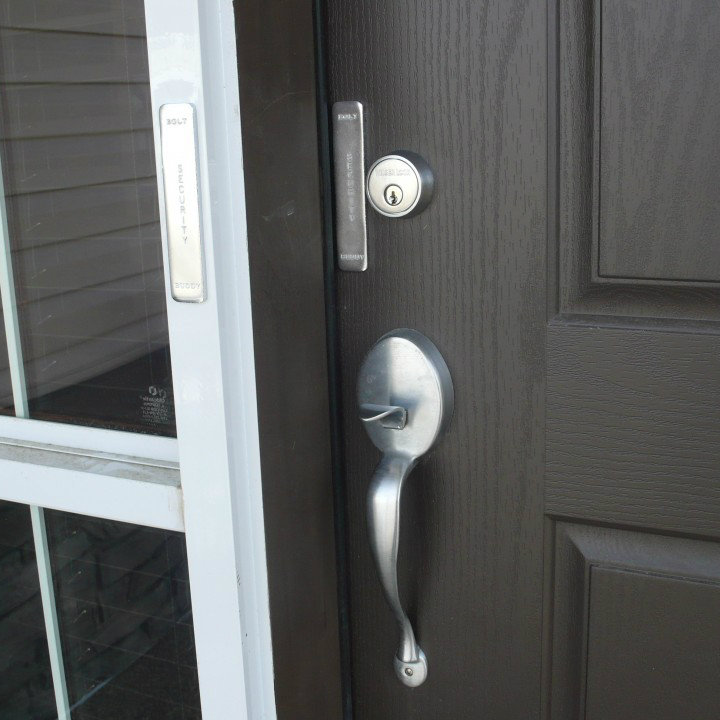